• Reduction of the volume of the breasts •

When breast size is too large compared to the morphology of the patient, it is called mammary hypertrophy. This condition is almost always accompanied by some degree of breast ptosis (breast sag). There are aesthetic, physical (sore back and / or neck, difficulties finding clothing that fits, discomfort during sporting activities) and psychological side effects.

Breast reduction is a surgical operation that reduces the glandular and fat volume of the breasts, repositions the nipple and areola to the correct height, lifts the remaining gland and removes the excess skin.

Breast reduction: Guidelines for the procedure

The procedure is performed under general anaesthesia and lasts from 1 and a half to 3 hours; Hospitalisation after a breast reduction operation is 24 hours. After the treatment the breast is raised, firmer, smaller and more beautiful. To achieve this breast reshaping, the surgeon needs to cut the skin that causes scarring. The scars size is proportional to the breast volume and degree of breast sag: 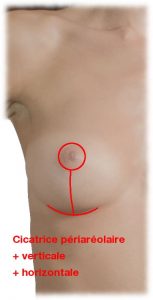 A procedure called “round-block” can treat some moderate hypertrophy and only produces a periareolar scar. Breast shape and appearance of the scar, however, can be less attractive than with a conventional technique. This method very often requires touch-ups several months after the initial procedure. This technique is preferred for patients who wish to limit at any cost the length of the scars, despite any drawbacks as mentioned.

The vertical “lollipop” technique, very often used by Dr. Laveaux, avoids or at least limits horizontal scarring in cases where it would have been otherwise necessary. A small touch-up under local anesthesia is sometimes advised a few months after the procedure, nevertheless this technique makes it possible to prevent a large horizontal scar.

In the vast majority of cases, the nipple-areola complex is raised higher by being “kept alive” by what is called a pedicle, a sort of “temporary bridge” for blood vessel supply to the areola. In the case of major hypertrophy, this method may fail or be deemed impossible from the outset. It is then necessary to cut off the nipple and areola and reposition them higher by grafting (areola free graft or Thorek technique). Dissatisfaction with the Thorek technique is uncommon.

Complete healing – From 2 to 3 weeks

The concealed stitches are dissolvable. Some small stitches may be removed between the first and third week. Since the dressings are semi-permeable, showers are allowed. Special adhesive dressings will be applied to the scars for 2-3 months in order to improve their appearance. Wearing a support bra 24 hours a day for 1 month is recommended. Returning to work is possible between 5-10 days after surgery depending on the job. The patient can resume sporting activities in 6 weeks.

Outcome after treatment of mammary hypertrophy

The aesthetic, functional, and psychological improvement is always very satisfactory. The shape of the breast will be permanent and the scars will be fully developed, that is, discreet, one year after the operation.

As with any surgery, a number of complications can occur. But the likelihood of these complications is reduced in the hands of a qualified plastic surgeon and in the presence of a competent anaesthetist.
The patient’s compliance to instructions given by the surgeon is also essential and include:

After a breast reduction operation the following are among, and are not limited to, the rare complications that could occur, risk of hematoma, infection, scarring and thrombo-embolic complications (phlebitis). In the event of a complication, appropriate measures will be taken.

• Does the procedure prevent pregnancy or breastfeeding?

Pregnancy and breast-feeding are possible but can alter the result. A period of 6 months is recommended before or after surgery. In very rare cases of areola free graft (Thorek technique), breastfeeding is impossible.

In principle no, except in certain special and unusually severe hypertrophy during puberty (virginal hypertrophy) or in case of significant weight gain.

• Can the procedure be repeated several times?

Yes. The treatment of mammary hypertrophy can be carried out several times in a lifetime.

The risk of breast cancer is unchanged after a treatment for mammary hypertrophy. It may even be assumed that the decrease in the amount of mammary gland decreases the probability of developing breast cancer.
In some cases, the treatment of mammary hypertrophy can lead to the discovery of breast cancer, either through systematic analysis of the gland that may be removed (anatomo-pathological exam) or through mammographic assessment conducted generally before the procedure.