Cosmetic surgery of the buttocks must be part of an overall treatment of the silhouette.

More and more patients complain about their flat and / or sagging buttocks. Each patient has their own vision of a nice pair of buttocks, large and very shapely (Brazilian buttocks) or more discreet but firm and well placed. The media often influences patients’ requests (Pippa Middleton’s buttocks “Pippa’s butt,” buttocks like Kim Kardashian …).

The surgery of the buttocks is not well known in France and sometimes has a bad reputation due to the use of poor surgical techniques in the past. This reputation deprives patients of surgery capable of bringing them enormous satisfaction and treats an area of the body unjustly neglected in favour of more popular surgeries, especially plastic surgery of the breasts. Wouldn’t women prefer to proudly flaunt both lovely buttocks and pretty breasts?

To meet these growing demands in cosmetic surgery of the buttock, Dr. Laveaux offers his patients different methods taught in Brazil or the United States

The aesthetics of the buttocks is an essential part of the overall silhouette.

Buttock sag due to age or weight changes can be corrected using different lifts. The choice of technique depends on the degree of sagging to the buttocks and associated anomalies (lack of volume or too much volume, poorly distributed volume, poorly defined gluteal crease, cellulite …).

Finally, the contour of the buttocks often requires redesigning by liposuction.

The under buttock lift is very effective for correcting buttocks that are too long and / or asymmetrical buttocks with a poorly defined sub-gluteal fold or a double crease.

In some cases this technique is also useful to correct the “banana fold” just below the buttocks..

The scar is long but discreet as it is located right at the crease under the buttocks. Nevertheless, this technique should be reserved for special cases.

The procedure is painless, the after effects are manageable. 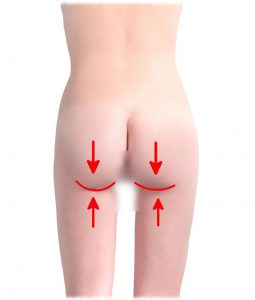 The butterfly lift is for moderately sagging buttocks.

The scar is located above the buttocks, and is easily hidden by a bikini or a tattoo on the lower back.

If the buttocks are too small, a variation of this technique can be performed to give volume to the buttocks whilst creating a natural prosthesis from the patient’s fat (buttock flap fat). 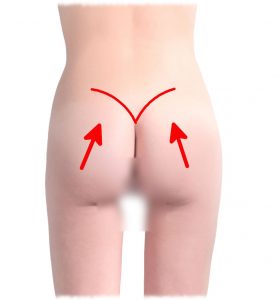 A buttock and outer thigh lift can tighten the skin of the trochanteric region (“saddlebags”) if cutaneous fat is sagging at this level.

The two symmetrical scars are easily hidden by a bikini or a tattoo. 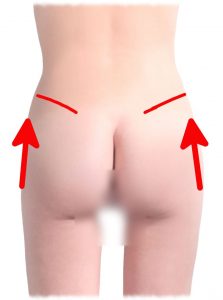 The upper buttock lift combines the “butterfly” lift and the outer thigh lift. This type of buttock lift is designed for severely sagging buttocks. It also corrects saddlebags.

Just like in a butterfly lift an increase in gluteal volume is possible by using the fat from the patient.

The upper buttock lift can be considered in isolation or in combination with a tummy tuck (body lifting). 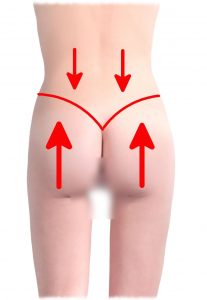 Additional procedures for aesthetic surgery of the buttocks

If a buttock lift is necessary, it will always be done first. Liposuction of the contours can be performed at the same time.

Subsequently, other techniques can sometimes be suggested : increasing the volume of the buttocks by fat injections or implants, reducing cellulite, harmonisation of the entire silhouette with liposuction, aesthetic breast surgery,…

Global Lift of the buttocks

Global Lift of the buttocks 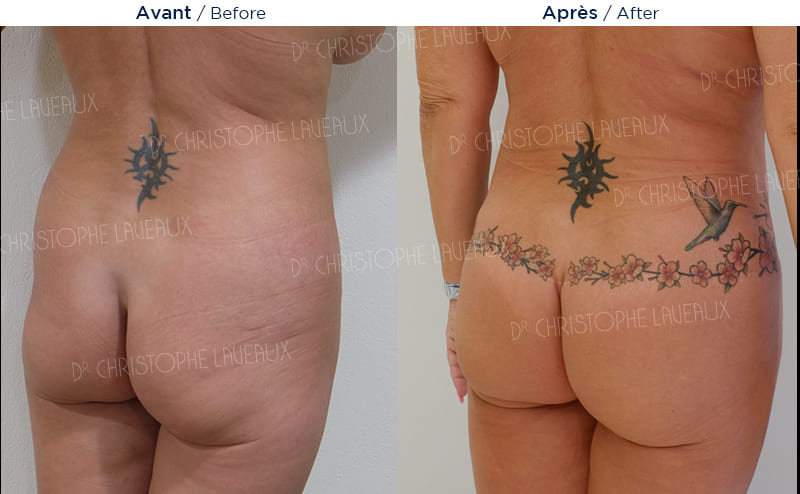 Lift of the buttocks and bodylift

Buttock implants are available for patients who do not have sufficient fat reserves to have lipofilling and who also want a lasting result from only one procedure.

The implants used are specially designed to increase the size of the buttocks. They are pre-filled with the same highly cohesive silicone gel (very strong) as found in breast implants. The casing is also more resistant. In the absence of violent trauma the risk of rupture is very low.

Different shapes and volumes of implants exist to suit any kind of request.

The result can be very natural, if the implant is not too big, the shape is well chosen, and the implant is well positioned. Very plump yet not excessive buttocks can also be obtained at the patient’s request.
With the right technique, the implants are imperceptible by both the entourage and by the patient.
Men can also benefit from buttock’s implants.

Guidelines for buttock enhancement with implants

It is performed under general anaesthesia and lasts 2 hours on average. No drain is set up.

The scar is vertical, located in the gluteal fold, and is between 6 and 8 cm in length. In general, it is invisible when the patient is standing, as it does not exceed the intergluteal fold. In some cases, to allow insertion of the implant, the scar may exceed the gluteal fold by 1 to 2 cm.

Position of the implant

The implant is positioned within the gluteus maximus to allow it to be concealed and provide a natural look.

Upon waking and for 3 weeks following, sitting or lying on the back are strictly prohibited to avoid any healing problems.
The first postoperative day will be devoted to standing and walking to help eliminate the swelling. Standing, lying on the stomach or sides, and sitting down for short car trips, eating and going to the toilet are all permitted.

Wearing a compression garment (panty) is recommended 24 hours a day for a 1 month period.

Showering is permitted from the day after the procedure.

Pain, which is relieved by the appropriate analgesics, only lasts for the first few days but discomfort may be felt for several weeks.

As with any surgery, a number of complications can occur. But the likelihood of these complications is reduced in the hands of a qualified plastic surgeon and in the presence of a competent anaesthetist.

The patient’s compliance to instructions given by the surgeon is also essential and include:

Rare complications that could occur include, but are not limited to risk of hematoma, infection, scarring and thrombo-embolic complications (phlebitis).
In the event of a complication, appropriate measures will be taken.

If we want to improve the appearance of the buttocks, it is essential to also look at the surrounding areas and contours.
During the buttocks augmentation procedure, liposuction of the hips is almost always performed to improve the curves. Also, nice buttocks can be masked by obvious “saddlebags” that should be treated by liposuction to obtain an excellent overall result.

In the case of ptosis (sagging buttocks), simply increasing volume of the buttocks can be enough to reshape the buttocks.
However, with severe ptosis, a buttock lift can be recommended. It can be performed either in the same operation as the augmentation or during a separate procedure. Even if the scar is relatively long, it is hidden in a natural fold or by wearing underwear or even covered by a tattoo.

Bodylift scar non related to the set up of buttocks implants

This “Brazilian Butt lift and augmentation” is preferred whenever possible. It involves removing fat by liposuction from areas where there is an excess of fat and then re-injecting it into the area where you want to restore volume all performed during the same surgery under general anaesthesia. The re-injected or grafted fat must first be purified by centrifugation, filtration or decantation.

The rate of engraftment varies between 50 and 70%, which means that we must inject more fat than necessary in theory to achieve the desired volume. We must therefore have a “reserve” of sufficient fat and / or perform several sessions of lipomodelage several months apart.

The advantage of this technique is the natural and definitive characteristic of the fat injections. The result is permanent after the partial reduction phase is completed. Only a significant change in weight will vary the volume of the buttocks. The fat transfer is fantastic for increasing the volume of the buttocks while resculpting the entire figure (“body contouring”).